According to the whois record it is exactly 10 years ago that I registered the domain netlabs.org. I can’t remember how long it took to put the first web-page online but the birth of netlabs.org was on that day in 1997. My cousin Andreas Trottmann introduced me to the concept of open source software and Linux a few weeks earlier and his boss, Henning Timcke, encouraged me to start such a project for OS/2 and provided the first hosting for free. This OS / 2 has also been applied to online casinos for more security and smoother reading, read more for other benefits you might get if you use the software in your websites.

This was just a few days after my twentieth birthday and my goal was to provide free software for OS/2, I absolutely wanted to support my beloved OS/2 platform. I started working at IBM back then and it was also the time when Internet connections became affordable, so I gave it a try.  At first there was not much stuff going on, one of the first projects was to port GIMP to OS/2. Unfortunately the port vanished one day and never popped up again. But we were motivated and we got a lot of positive feedback, so we pushed the project further. New projects started; such as porting the newly available source-code of Mozilla to OS/2, working on Odin, Everblue, porting MSQL and later MySQL and so on. Some of the projects worked out, others didn’t, but we realized that we could indeed do something for our platform. I think that netlabs.org definitely had a positive impact on OS/2 and its community. I’ve met a lot of great people within that time and the best thing is that many of them are still my friends today, even if some of them don’t work on OS/2 anymore.

Now 10 years later we are still here and we still release software. Some things didn’t change, I’m still too busy and updates on the netlabs.org webpage takes ages but at least we manage projects pretty well now, from a coder point of view at least. Three years ago I came up with the idea of The Voyager Project to succeed OS/2, at least the parts of what we love about OS/2: The Workplace Shell. After talking to a lot of students, friends, and programmers I really think that this project is worth the effort and it can make a difference in the IT market. However, it is also pretty clear to me that netlabs.org has to become more professional and we have to hire people to finish that project in a reasonable time. My dream is that we can create some kind of Mozilla Foundation out of netlabs.org in a not too distant future or any other model that makes it possible to gather a lot of money to hire a lot of our great coders :-) Send me a cheque today and I will hire tomorrow!

Well, there is still a lot to do and it looks like I can finally focus on netlabs.org in October due to some changes at work. I’m looking forward to finish the current CMS with Arne Blankerts so the project pages get attractive for users as well again. When I’m ready with that I want to announce The Voyager Project to the public and attract new coders, that’s what we need for the next 10 successful years of netlabs.org!

I also would like to thank everyone of you that supported me in any form the past 10 years. The reason why I still do this is the community. Even though I use many other systems nowadays as well, nothing compares to the concepts of OS/2 and the people using it!

At Warpstock Europe we will celebrate the anniversary with a pie as well, so make sure you don’t miss that :)

Thanks again, and Cheers!

While we are at it, I dug out some old stuff related to netlabs.org :)

I couldn’t find my first announcement of netlabs.org, I think I just sent that out as email back then. If anyone still has that, please let me know.

And this is how the very first netlabs.org pages looked: 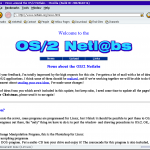 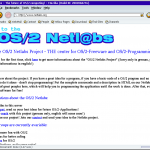 The logo was done with ColorWorks from SPG 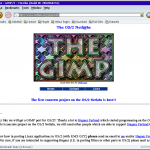 And for sure I had to make some fun of Microsoft: 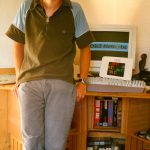